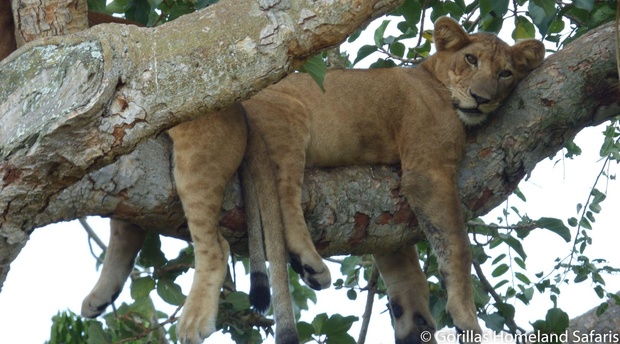 The exciting insert into this itinerary is an additional day in Bwindi Forest, where you walk through the rainforest from the North to the South. You not only get the opportunity to gorilla trek twice and in two different locations of the forest, but also spend the day walking through the forest at your own pace along meandering trails with your expert guide. This is an excellent chance to experience the sights and sounds of the rainforest environment without the focus of the Gorillas.

Arrive at Entebbe International Airport, meet and greet and transfer to your hotel. Time permitting we will also visit the Entebbe Botanical Gardens.

Drive to Kibale Forest area, the drive is a full day of approximately seven hours. After leaving the Lake Victoria Basin pass through beautiful agricultural countryside where every type of fruit and vegetable imaginable is grown. Upon reaching Kyanjojo, in the lower foothills of the Rwenzori Mountains (Mountains of the Moon)}, we drive through beautiful tea plantations and into Kibale tropical rain forest.

Today we get the opportunity to explore Kibale Forest National Park. Kibale Forest is home to 13 primate species and a guided forest trek can be taken in search of one of the most popular primate species in the world – the chimpanzee. There are 9 diurnal primates, these include, vervet, red-tailed, L’Hoest’s, blue monkeys, grey-cheeked manabey, red colobus, black and white colobus, olive baboon and the most famous of all, the chimpanzee. Although chimp sightings are not guaranteed, the odds are good with the chance of encountering them standing at higher then 90%. Whilst trekking in the depths of the lush green forest, you will be surrounded by bird song and can expect to see at least 5 or 6 other types of primate. The walking is fairly easy due to the well-maintained trails and reasonably flat terrain.

This morning we have a swamp walk in Bigodi. Bigodi village is situated in the highlands of western Uganda, in the shadow of the Ruwenzori Mountains, the famous “Mountains of the Moon”. The swamp walk takes place in the Bigodi Wetlands Sanctuary, which is located in the Magombe wetland. The sanctuary is a major eco-tourism attraction in the Kibale Forest area. The Sanctuary is operated by the Kibale Association for Rural and Environmental Development (KAFRED), a registered local community based organization.

In the afternoon we drive to Queen Elizabeth National Park. The drive passes through Fort Portal and then south along the eastern length of The Rwenzori Mountains, with the hope of viewing the glaciated peaks. We gently descend into The Great African Rift Valley and Queen Elizabeth National Park and Mweya Lodge, situated on a peninsula overlooking Lake Edward and Kasinga Channel, offering beautiful views of the park with the Rwenzori Mountains in the background. Queen Elizabeth National Park resides in a fertile, equatorial area and has beautiful scenery. It is Uganda’s most popular and accessible savannah reserve, with a total area of 1978km². It is primarily associated with grassy savannah plains, but this impressive park also includes within its boundaries, leafy rainforests, dense papyrus swamps and natural volcanic crater lakes. As a result it has one of the highest biodiversity ratings of any game reserve in the world, including a total of 95 recorded mammal species and more than 610 species of birds.

Game drives in Queen Elizabeth National Park including a shared boat trip of about two hours on the Kazinga Channel to view some of the largest concentration of hippo in the world {reported to be about 30,000} and other game with excellent birding. Queen Elizabeth National Park is one of best birding parks in Africa, with 560 + recorded species and a record of 296 bird species seen in one 24 hour period.

Today we drive through the park to the Ishasha region. Game drive in search of tree climbing lion (75% success rate) and other game. Drive to Bwindi Impenetrable Forest National Park(a World Heritage Site) passing through the scenic area known as The Switzerland of East Africa. Bwindi forest is a magnificent luxuriant swathe across the steep ridges of the Albertine Rife Valley, this ancient rainforest – one of the few in Africa to have flourished throughout the last Ice Age – is regarded to be one of the most biologically diverse forests in Africa.

Bwindi Impenetrable Forest National Park has at least 90 mammal species, including 11 primates and is ranked as one of the best in Uganda for forest birding, with 23 highly localisedAlbertine Rift endemics. Bwindi is renowned for it’sMountain Gorilla population, slightly more then half the world’s mountain gorilla population is resident in Bwindi: an estimated 280 – 320 individuals living in 15 groups. Looking deep into the expressive brown eyes of these gentle giants is an extremely special privilege and an encounter unparalleled in most likely the whole of Africa.

After breakfast take a short drive to Park Headquarters and meet with excellent local guides and trackers who will give a talk on the etiquette of gorilla trekking. We then hike into the forest where the gorillas were seen the night before and track from that point. The trekking can take from 1 to 6 hours and climb to altitudes in excess of 7,500 feet. The terrain is rough and at times muddy. Although the Hike is physically demanding the beauty of the forest and surrounding scenery make the trekking worthwhile. Once the gorillas are located all fatigue is forgotten, as the experience is often described as being the most profound natural history experience in the world. Picnic lunches are provided and it is important to take plenty of water. Cameras and plenty of fast speed film is recommended. It can rain at a few minutes notice; hence waterproof clothing is a good essential including zip lock bags for cameras and film.

Today we have the opportunity to spend more time in the rainforest.

We have a guided forest walk through the forest to Nkuringo. Nkuringo is on the southern side of the rainforest near the town of Kisoro and also has habituated gorilla families nearby.

There are two walking trails between Buhoma and Nkuringo, the Ivy River trail and the Kashasha trail. Both are between 6-7 hour in length and offer visitors a close up experience of the natural wonders within a rainforest environment, including a number of monkey species, duikers, birds and many colourful butterflies.

Drive to Mbarara passing through the Switzerland of East Africa area and eventually into Ankole Cattle country around Mbarara. These cattle are incredible with horns larger than one can imagine. Continue to Lake Mburo National Park, game drive. The drive today is 6 to 7 hours. Lake Mburo National Park is a small park, excellent for birding, antelope and other grazers, one of the only places to easily see Impala and zebra in Uganda. Game drives offer particularly picturesque game viewing with the Park’s mixture of savannah, acacia woodlands, grassy valleys, rocky outcrops, swamps, lakes and rolling hills.

Herds of impala (found nowhere else in Uganda), buffalo and zebra, plus waterbuck and eland are amongst the variety of wildlife to be seen. Birders will enjoy the Park’s 310 recorded water and dry land species. In this valley we can operate night drives and walks. This is the only park where we will see Impala and Burchell’s Zebra. It is an excellent place for walking and exploring a nearby Khopji to perhaps see Klipspringer. Game drive to the lodge.

This morning we have an early morning game drive or bush walk before driving back toEntebbe, this takes approximately 5 hours – road and weather dependent. If time permits it is possible to stop in Kampala for shopping and lunch and a visit to the Mpigi Royal Drum Makers. You are then transferred to Entebbe International airport to connect with your departure flight.

Tailor-made for your needs

All our itineraries are customizeable based on your time allowance, budget, and preferences. Speak to a tour consultant to tailor your ideal Ugandan experience.

View   One Gorilla and Chimpanzee permit
For your Birding and Wildlife Photography in East Africa, Book With Us

We do Birding, Gorillas Trekking and Safaris game drives in Uganda, Rwanda, Kenya and Tanzania. Book with us for your trip of lifetime